The Podcast The Newsletter Music Video CV
Previous month:
February 2010
Next month:
May 2010

Choreography in the score for Poulenc's 'Sonate' for 2 Pianos (1953)


Francis Poulenc wrote a Sonata for two pianos, published in 1953 - the two piano sonata is an enormous and magnificent piece, which  should not be mistaken for an earlier Sonata for 4 hands (on one piano).  There’s a beautiful repertoire of early 20th century French music for two pianos.  Ravel wrote Mother Goose.  Debussy has some Antique stuff.  Faure (a little earlier) wrote Dolly.  I played a lot of it as a younger person, and I remember the experience with great fondness.

It's easy to pass over Poulenc in a discussion of structure and theory - anything so lush, so melodic with such a coquettish promise must surely have been pulled from a cognac-fuelled improvisation.   This  would be doing a disservice to the composer, and to the listener who is transported by the music.  The Oboe sonata is as meticulously ordered around pitch class as anything written by the contemporary Stravinsky, and  the two piano sonata offers many opportunities for reflection - some prurient, some intellectual, others in a place that questions the line between the two.

A puzzle is presented with the very beginning of the piece: a dramatic clanging sound  that opens and closes the sonata:

The same kind of writing ends the piece, but it is ‘scored’ differently. ( ‘Scored’ refers to which notes are played by which hand, taken from the act of writing a musical score).  It's curious to me why Poulenc would have done that.  In the first movement, there are huge leaps by each hand of each pianist.  In the final movement, one pianist plays notes in a central part of the keyboard, while the other plays a series of chords across the keyboard.  Sounds the same, written quite differently.

Perhaps what Poulenc has done is to score the composition so that the musicians have to move in a particular way?  Perhaps in addition to the actual notes on the page, Poulenc is interested in the relationship of the pianists hands to each other, to the other pianist across the stage, and to the audience. Perhaps he is:  I certainly am.

Consider the layout of the pianos on the stage.  These pictures  is taken from a film recording of Poulenc playing his concerto for two pianos...unfortunately, there’s no full stage shot available, neither could I find a film of the actual sonata.  But this gets across the visual layout of the pianos on stage.  This is a standard arrangement, with the curves of two grand pianos pressed together - like the Newfoundland coast and western Europe in geological text books on tectonic shift.

The first relationship  to expose  is between the players and their pianos.    If  each note is assigned  a number, with the lowest key on the piano being zero, and the highest being 87, then I can create a chart that shows the relative position of each hand in each beat of the music.    The x-axis is time, represented as each quarter note beat in the piece.  The y axis shows the number of each pitch.   This is the perspective of someone suspended from the ceiling above each pianist - it is a mirror image, where the lowest note on Piano 1 is directly across from the highest note  on Piano 2.

An opening line downwards is followed by lots of jumping around.  These two gestures - split at Rehearsal letter A in the score -  define the overall  structure of the section.   I want to highlight the relationship between mirror hands, the hands that are directly across from each other.  Here’s a chart that shows the right hand of one pianist with the left hand of the other: 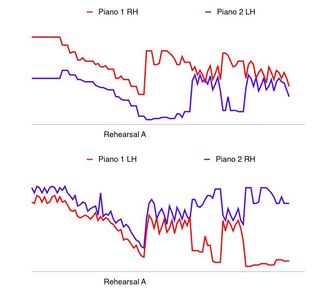 When one hand moves up, the other moves down on each respective keyboard.

Consider what the positioning of the pianos on stage does to the pianist’s hands in relation to the audience. From the perspective of the audience, the hands closest to us are moving in parallel...as one jumps away, the other follows.  My thought is that this visual relationship is as important to the interpretation of the piece as the actual notes being played.

One way to make this relationship clearer is  if I revisit the chart of lines representing note values, but do some quick math so that instead of a fixed value on the keyboard, each note is assigned a value in relation to the audience.  For  the pianist on the left, I subtract the key position from 88, to get a value of distance to and from the audience.  Zero on piano 1 is the highest note:  zero for Piano 2 is the lowest note.  This  chart shows only  the hands closest to the audience.

From the pianist  perspective, in relation to the keys, even in relation to what we hear, the two musicians  are playing opposites.  But to the visual perception, the pianists are moving as if joined by a bar connecting their chests across the pianos.  As one leans right, two leans left to follow.  The pianists are moving together towards and away from the audience. Two marionettes whose bodies lean and shiver in tandem over the two opposing keyboards.

This is a pretty piece of choreography.

I awoke one morning to find that I was a hair on Blake’s Buttocks.  Peering through a dense miasma at the cold grimace of a Pittsburgh morning, I was startled to see William Blake himself.  At first, I thought that perhaps he had contorted his body in such a way as to place his rotten teeth in close proximity to my unusual position within his anus.  A moment’s thought showed me how unlikely that was:  this was clearly an astral projection of the author, and one to which I was accountable in some as yet undisclosed fashion.

I have seen a self portrait of William Blake, a pencil sketch in which he is walking along the street, turning back to look at the artist.  He is wearing a hat - a hat the same style as one given to me by Kathryn as a gift in winter 2008.  I assume that this is somehow responsible for the situation - inserted in Blake’s rectum -  in which I now find myself.

Blake spoke to me from this obscure advantage:  “In  the body, as the city, to the land” , he says.

I know  that when I am walking, my stride begins with some hesitation.  I am counting malas, laboured with my early morning breathing, muscles still tight, alignment of the spine to skull base still unsure (each morning feels like I am reliving our purported ape ancestors' descent from the trees and ascent  onto 2 legs).   The snot I blow directly to the ground, the odd occasion when I am forced by necessity to urinate upon the street.   This is a metabolic understanding of my self, the gradual deepening and strengthening of breath as my legs loosen to the hip.  Lungs, heart, skeleton:  all organs holding a specific pattern reflective of immediate experience – the drink I had last night, the food I ate beforehand – and of my genetic history – complex and challenging.

The city responds to this .  The lark rises in the morning chirping merrily for the flaxen milk maids.     Blake wrote about a 'vegetal'  intelligence.  Victorian ancients discuss leylines and green men in gothic carvings, stomp across the dales and vales.  This human activity  activates the cityscape - recall Wordsworth on Westminster bridge

“The beauty of the morning; silent, bare,
Ships, towers, domes, theatres, and temples lie
Open unto the fields, and to the sky;
All bright and glittering in the smokeless air."

But No - a grimace crosses Blake’s face (and a surge of gas supports his displeasure).  I am obviously not answering.   Let me pull a copy of James Joyce’s Ulysses  from my own behind, and quote: “ Through spaces smaller than red globules of man’s blood they creepycrawl after Blake’s buttocks into eternity of which this vegetable world is but a shadow.  Hold to the now, the here, through which all future plunges to the past”.  I am ejected!  Oh what sweet release.   With a finger in the snow before blessed forgetfulness removes the thought, I draw this table with the stains of my tribulation:

A sequence to which no doubt I will refer in future walks and writings.  There is a space in which the human body, the developed City, and the evolving cosmos can all be viewed as a resonant structure - one that 'plunges to the past', extracting architecture from chronology.