Notes from a presentation I gave at  the 4th International Space Arts Workshop last week (May 20-22 2013). 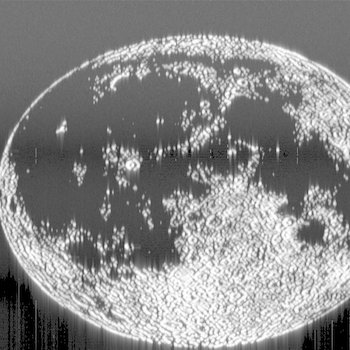 This is an image of the moon, but  it is not a photograph:  the image is a representation of sound, a spectrogram.   In a spectrogram,  the x-axis represents time, and the y-axis represents frequency.  Time is divided into small windows, and frequencies are grouped in buckets.   I defined both values, and also determined that the total duration would be 28 minutes.

Here's the sound file, which you can also  download The Moon Ikon is the poetry of the moon exposed  by sound.  John Tavener has written:

"To me, [the icon] is the most transcendnt form of art that exists in the west  - that is, if you call it art in the conventional sense.  Whether you can write music that is truly like an kon, whether you can prostrate in front of a piece of music, I simply do not know.  I suppose the closest you get to it is in the chant that goes with the ikonography of the church.  I might also say that an ikon dissects us, and I think truly sacred music should do the same."

The image comes from  analyzing sound with  Fast Fourier Transform analysis (FFT).   I used software modules from the IRCAM Open Music set.  Fourier analysis breaks  complex wave patterns into a series of sine waves.  Adding all the identified sine waves back together will produce the original wave.   Fourier analysis assumes that the wave is unchanging, so FFT analysis  breaks time in to windows.  Within each window of time, each sine wave is captured  to the range defined by the buckets of frequency.  FFT analysis strings the windows of time together to show change over time.  The output of FFT analysis is a spectrogram, which can be rendered as an image showing frequency, duration and amplitude.  Amplitude is represented as brightness in the image.

The sound was produced in the first place by interpreting an  image of the lunar surface as a sonic spectrogram.  The  spectrogram was reverse engineered in to sound.  I took the sound, ran it back through the analytic software, and produced the Moon Ikon image.

Stella Kramrisch defined a yantra as  "...an artifice in which the ground is converted into the extent of the manifest universe."  The Moon Ikon is a gateway to lunar phenomenology.  Using the second analysis image instead of the original picture introduced new artifacts that emerged from the sonic playback, but the Characteristic Relationship of the lunar topology is transferred.  The  Characteristic  Relationship of the topology of the lunar surface is Height  at a given set of coordinates.  This  Relationship is  transferred to pixels in the image.  Mapping the cardinal position of each pixel to buckets of frequency and windows of time maintains the Relationshipin the new medium.  Note that I use sound but the output could have been to any system:  sound is only one possibility.